The Tragedy of MacCain 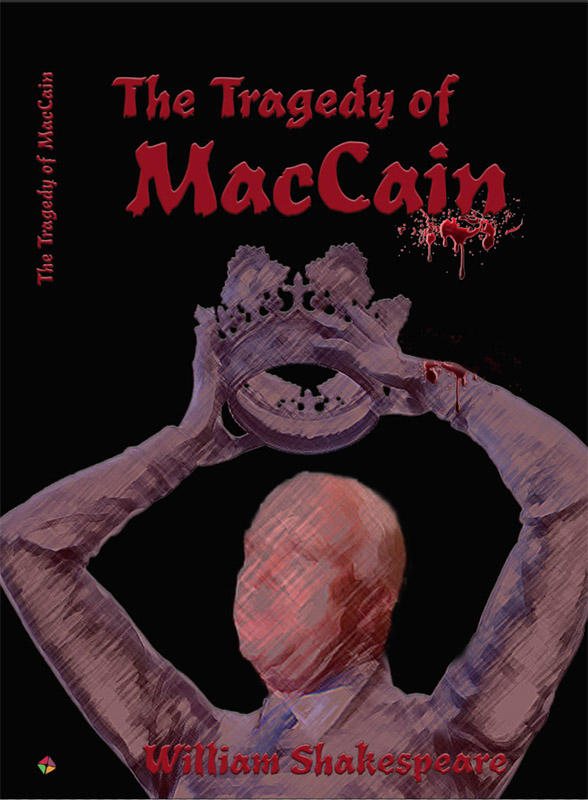 The Bard is back with an all-new classical tragedy! This monumental drama is staged, not in ancient Scotland; rather, in our own times. William Shakespeare’s great literary intelligence takes as its material: John MacCain’s Vietnam captivity, his sponsorship by intelligence agencies, his Operation Phoenix membership, and the involvement of his associates in President Kennedy’s assassination. Channeled from the Big Library where great minds abide eternally.

Summary of WilliamShakespeare’s ‘The Tragedy of MacCain’:

In a North Vietnamese jungle clearing, two high-level intelligence agency operatives: MacCain and Colby, encounter three strange women who prophesy that MacCain will become President, while Colby’s descendants shall be elite Deep State insiders. Both men want to hear more, but the “weird sisters” vanish. MacCain is Navy Intelligence; his lack of routine flight training being the reason he crashed so many warplanes.

John F Kennedy promotes MacCain for his success in recent battles with the Vietnamese Communists, (this seems to support the witches' prophecy). However, the military success that MacCain touted was that of Operation Phoenix, a brutal covert action regime, directly targeting the population with murder, torture, and extortion. Before the reality of this duplicitous black ops-run policy had become known in Washington, JFK impulsively proposes a visit to MacCain’s penthouse apartment in New York.

Is this a high-powered rifle which I see before me?

Lady Macbeth (George Herbert Walker Bush) reads aloud an e-mail from her husband about the prophecy. She vows to help him become President. MacCain’s prepares for Jack Kennedy’s arrival with fancy ladies. The MacCains wait until everyone is asleep; then, Lady MacCain doses the guards with fentanyl, while her husband does in their guest. He regrets this act immediately, but is reassured by his wife. She smears tainted rape-kit evidence on the dead President just as RFK is buzzing in the lobby below. MacCain arrives and goes nuclear, executing the sleeping Secret Service agents in rage and retribution. Martin Luther King and Uncle Sam flee, fearing for their own lives.

MacCain is now a “made man” in the spook community, but he is plagued by a sense of insecurity. He plans a professional hit on Colby and his son. Colby’s corpse is shoved off in his canoe, but the boy escapes the assassins. That night, at a formal dinner, MacCain sees the ghost of Colby and worries the invited VIPs with his mad response. Lady MacCain, now Queen of the Deep State, dismisses the guests and tries to calm her husband.

By the pricking of my thumbs, something wicked this way comes.

MacCain seeks out the witches and learns from them that he will be safe until Central Park marches into battle against him, and that he need not fear anyone born of woman; so he embarks upon a depraved reign of terror, sponsoring drug-fueled mercenary terror gangs to rape and pillage in Syria. Bobby Kennedy, pained with grief, has gone to confer with Martin Luther King in a safe house. Bobby is young and unsure of himself. Uncle Sam persuades him to lead a commando force against MacCain. Meanwhile, a psychotic Lady MacCain babbles her mad secrets to the CIA doctor. MacCain feels safe enough in his penthouse suite, until he is told that Central Park is moving towards him; Uncle Sam’s soldiers display the New York Post headlines boldly screaming: ‘MacCain Traitor!’ they use them as cover for their assault on the penthouse.MacCain’s courage collapses and he denounces the witches.

Exeunt, fighting. Alarums Retreat. Flourish. Uncle Sam presents the head of MacCain to The Ghost of JFK, who declares peace and announces a gala ball with invitations to all to attend his inauguration in Washington. Flourish