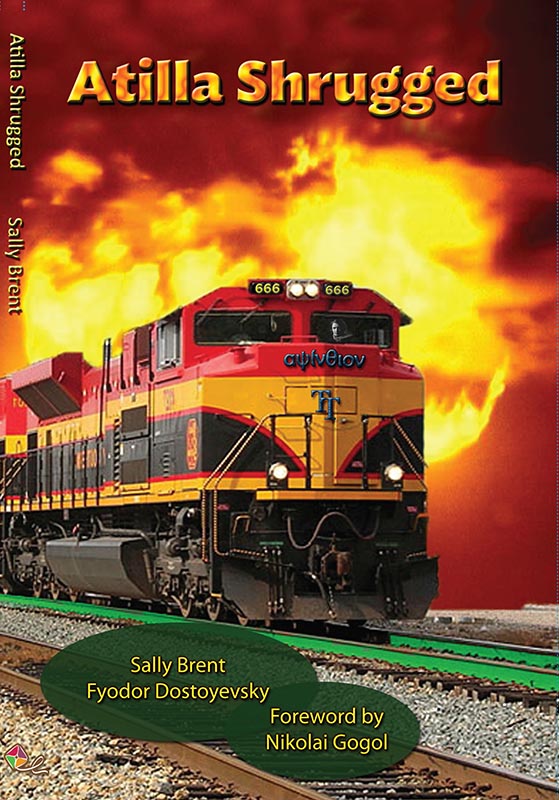 Reflections on the Apocalypse of Saint John Galt, by Fyodor Dostoyevsky.

The rich grind the poor into abjectness and then complain that they are abject. They goad them to famine, then hang them if they steal a sheep. — Percy Bysshe Shelley

Atilla Shrugged is a 3 act play drawn from Dostoyevsky’s novels with characters from Ayn Rand’s novels cast in Fyodor’s roles.

As I watched Alan Greenspan make his chastened confession of having uncovered a flaw in his theory of self-interest as it applies to the fulfillment of fiduciary responsibility, I wondered if perhaps it would have been better had he foregone his illustrious career and, from his days as a tender foundling of the Randian clique, to have put that clever mind of his on strike, stoically withholding the bounty of his demiurgic intellect.

I imagined Lloyd Blankfein as a Galtian destroyer, calling on those great men who carry the weight of the world on their shoulders: the leviathans of Goldmen Sachs, Lazard Frères and JP Morgan, inducing them to forsake their benevolent yet misguided efforts for the betterment of their brothers.

Lloyd would bring them around to the very conclusions that they themselves had already secretly reached, but were reluctant to admit, even to themselves. With the benefit of the destroyer’s guidance, they would come to see the futility of continuing to serve the common herd of whining, lying and chiseling humanity demanding that they had a right to the return of capital so fairly lost on the field of battle in the holy crusade for accelerated returns at compound interest. Lloyd met his critics head-on with an uncomplicated declaration: “I am doing God’s work!”

With the Titanic pride of a man-god, legitimately ordering his life as he pleases, gathering together the chosen few to Galt’s Gulch, to wait out the inevitable dissipation of our pathetic wrath and the final collapse of a decadent civilization. Then the creators would return together in triumph to show those of us who had somehow survived without them, how it’s done.

Had we thought things through, we might have ceded Lloyd and his friends the prison island of Zanzibar for their purpose. For some reason, we went in for their shell-game of credit default swaps instead. The curious legacy of Ayn Rand, champion of the irascible selfmade man, is that the greatest looters in the history of Man carry her portrait around in their wallets.

Alan Greenspan qualified his remarks by saying: “I really didn’t get it until very late in 2005.” In all fairness to Ayn, all the way back when “I like Ike” still had currency, she seemed to have an inkling of where we were headed, writing:

“He was seeing the enormity of the smallness of the enemy who was destroying the world. He felt as if, after a journey of years through a landscape of devastation, past the ruins of great factories, the wrecks of powerful engines, the bodies of invincible men, he had come upon the despoiler, expecting to find a giant—and had found a rat eager to scurry for cover at the first sound of a human step. If this is what has beaten us, he thought, the guilt is ours.”

— Atlas Shrugged — Chapter IV — The Sanction of the Victim

Michael is founder and principle editor at Chiringa Press and an avid if amateur historian. Michael is a software developer, Agile process coach and frequent speaker at software conferences.