The Battle of Tierra Blanca 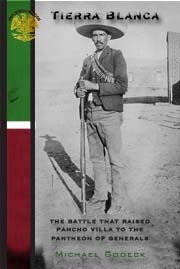 Anthology of essays on the representation of death in Mexican literature

This is the story of a small battle in the big scope of the Mexican Revolution but one that played an outsized role in the career of Pancho Villa. Our problem is that there is more than one account of the events at Tierra Blanca; we need to sift the sands to see what comes through intact. The victors write much of history, and that hold true here. Pancho Villa’s account of his victory at Tierra Blanca has formed the backbone of most accounts.

Or perhaps we should say, Luis Guzmán cast his words as Villa’s in an historical novel which has provided a narrative so influential that it was adopted as the primary source for the official history of the battle by General Sanchez Lemago in his definitive history of the Revolution published in 1957, and from there was woven into the fabric history. Guzmán and Lemago are essential sources, although by now we can acknowledge that Guzmán’s is an heroic vision. When we place these sources in the light of the accounts of Juan Barragan Rodríguez and Francisco Almada, the overall profile of the events change little and the essential outcome is the same, but we find that General Maclovio Herrera cast a long shadow on the battlefield at Tierra Blanca on the decisive day of 25 November, 1913.

Among the sources we find that of Ivor Thord-Gray, as recounted in his memoir Gringo Rebel. The Swedish adventurer tells us something of the battle which is quite useful as we are sifting and weighing the discrepancies in the other sources. However we find that, before we can tell the story of Tierra Blanca, as you will see, we have clear any doubts you might harbor regarding authenticity of Thord-Gray, so this is where we’ll begin.

In introducing Thord-Gray, I’ll first give a respectful tilt of my hat to Adolfo Arrioja Vizcaíno, whose work on I. Thord-Gray, El Sueco que se fue con Pancho Villa. (Editorial Océano de México, 2000), has raised more questions that it has resolved, as a good history might.

Our story of Tierra Blanca begins with, I. Thord-Gray, whose first hand account of the battle is essential for putting context to our other sources. Thord-Gray did not ride with Villa metaphorically, but actually (a de veras), and whose account of those days is, I believe you will come to see, an authentic one.

Michael is founder and principle editor at Chiringa Press and an avid if amateur historian. Michael is a software developer, Agile process coach and frequent speaker at software conferences.